How I Learnt to Forgive

I was going to write ‘Five Ways to Forgive Someone‘ but decided against it.

Instead I’m going to tell you my story of how I learnt to forgive.

Because, it’s very easy to write an article with some bullet points telling you what you need to do – but how often do we read that kind of article, think they are brilliant ideas, and then forget them 10 minutes later? I don’t think I have ever put into practice anything from any of those articles, and over the past 12 months I have read a lot them. Most of them had great advice, but they are often generic and very rarely memorable or make a real difference. If lists of advice really solved important problems with no effort involved, there would be no therapists in the world and no-one would ever need antidepressants or counselling, instead there would just be a bullet pointed hand-out with a solution for the relevant problem neatly highlighted.

I’m not going to give you a breakdown of all the times I’ve been heartbroken and how I’ve managed to forgive and bounce back again and again. I don’t think that will differ much from anybody else’s story, as the main ingredient in feeling better and getting back on track is time, and there’s nothing special about that. I’m just going to concentrate on my most recent experience and use it to explain, in the best way I can, the power of forgiving.

I fell in love so quickly and in such a big way I barely had time to realise what was happening. Looking back, how it happened is still quite a blur – although I can remember the moment of the first text, details of when we first met up, how shy I felt at first, how great it became. But let’s skip to the end, because this article is not about our relationship. 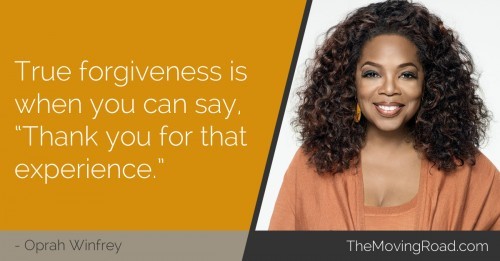 After around eight months things had become far from perfect and we split up. She wanted to concentrate on her career, and I understood that decision, although I found it extremely difficult to take at the time. I did all the normal things you shouldn’t do at the end of a relationship, the things we all do when we don’t want to lose someone. I was hurting big time. Then I started to feel numb, and ultimately fell into the trap of listening to the blame game going on inside my mind. First I blamed myself, which included everything from my disability, personality and my obsessive need to be right about everything. Then I moved on to blame everybody else; friends, her friends, both of our families. Of course I didn’t blame anyone out loud, this was only going on in my mind or in the occasional conversation with close friends, but it was still happening. Ultimately, the only pleasure that I was able to hope for at the time was the knowledge that she was suffering as well. The idea that she had moved on with her life and that I was forgotten was soul destroying and by far the biggest pain imaginable.

But here’s the thing: it was all in my head. Every why, what, and how was my own creation – it wasn’t based on fact, and in actuality it was completely made up. To fix it, I had to change what this person meant to me. In my head all I could focus on was that I had lost someone amazing who I put on a pedestal. Instead I have now come to view her as somebody I am eternally grateful to for what she taught me and the opportunity she gave to grow into the person I am now; someone far better than I would ever have become without getting that severe emotional beating I now see I so badly needed.

You see, life is defined in moments: emotional impacts that will either give you the kick in the butt or the hand up that you need at that time. You need to embrace these moments and find the gift presented even in the most awful times.

If you’re going to blame someone else, then blame them (or rather, give them the credit) for everything: this includes making you a stronger and essentially better person, and a whole heap of other ultimately positive influences they will have had on your life.  This will give you the opportunity to see them in a different light and hopefully will allow you to move on.

There are still of course the generic suggestions for how to move on, like breaking off all contact, deleting their number and removing them on Facebook, perhaps even get absolutely blind drunk – but will that really help you?

PreviousWhat Do Strangers Think Of You?
NextI’m paralysed, why read a book about marathon running?