Learn to love the bad times too!

I know, am I actually suggesting we should enjoy our lives no matter how bad they get?

Well, yes, kind of. But, not completely.

Bad things happen and life can take a turn for the worst at the most inconvenient time. My life is the perfect example of that, when I was 18 years old and about to take on the world by becoming some amazing human through doing very little. Yes, I was a normal teenager! On September 1 at 10:31 PM my life took one of those turns, I broke my neck diving into a swimming pool which left me permanently paralysed. You cannot get more inconvenient than that!

Of course, still lying in a hospital bed weeks and months later it was very hard to see the light at the end of the tunnel (to use a common metaphor).

Nothing lasts forever, everything is temporary and what is happening right now is only temporary. Just like when I was lying in that hospital bed 23 years ago, it was only temporary. Things change and the rules of the universe simply do not allow anybody or any given event to be permanent.

I can list the bad times in my life easier than I can list the good times, they had a bigger impact, they affected me most and seem to last a lot longer. But they all have one thing in common. They taught me a lot. Each one of those bad times taught me a number of valuable lessons, it was then that I grew in character and became that little wiser. 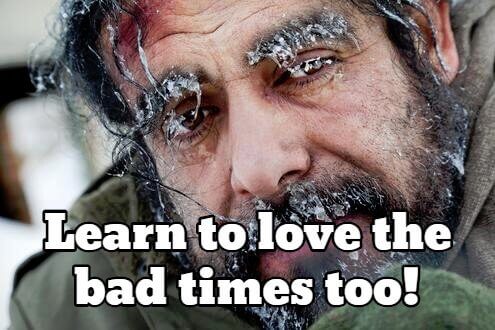 Well, what do I know about the struggle that you are going through right now, yes you, you right now? In fact very little, I haven’t got a clue how you are feeling or how it is affecting you personally. However, I do know that it is temporary. I also know there is a lesson to be learnt and until you learn that lesson you will continue to dwell in the bad temporary time. You can stay and become a victim, the person that list’s everything wrong in their life before they can say one positive thing or you can say, no that’s not me.

It would be easy for me to become a victim of my circumstances, childhood divorce, grandfather committing suicide, I attempted suicide as a teenager, breaking my neck at 18, left paralysed for life, bankrupt at 30 and more heartache than I ever thought my heart could handle.

I am somebody that has had some bad times, my life has taken some serious turns down many places I didn’t want to go but I have learnt, and boy have I learnt. Today I have become somebody that has an ability to empathise with others, to help other people overcome adversity and see that their own bad times will not last forever and in time they too can learn to look back and realise the bad times are the ones you cherish most.

So if you really want to appreciate who you become start thanking the roughest times in your life, the people that said no to you, the people who once pushed your buttons the wrong way and the enemies that made you stronger because they challenged you every step of the way.

Learn to love the bad times too.

If I helped, and you would like to support my work buying me a coffee would be awesome.
If this helps you maybe it will help somebody else!
Facebook
Twitter
Pinterest
PreviousUnlock the power of your word
NextWhy New Year Resolutions Fail

Brilliant, it's time to say goodbye to anxiety!

My newest meditation is a journey through nature, combined with powerful affirmations that will start working immediately.

Where do I send the link?

Previous
Next
I respect your privacy, I will only email my weekly wisdom to help you find inner peace. You can opt-out at any time, every email will have a link at the bottom for you to do this. Plus, I will honour it, unlike others. Any questions email me steven@stevenwebb.com
Say goodbye to anxiety?
Nope I'm Good
Oh Yes