Your life is not a movie

Whenever we hear a story or watch a movie of how someone overcame some terrible adversity in their lives, we are inspired by their strength and their ability to endure the harshest of times.

In the first five minutes of such a movie we are often introduced to the characters; the husband leaves for work, let’s say it is his last day as a police officer, and he promises to be home for a certain time.  At that point we know something is going to happen because of the set-up, and we spend the next 90 minutes wondering whether he’ll make it to his daughter’s graduation!

The movie progresses and the bad things start happening – in the 40 years of being a police officer he has never had such a bad day. The lives of his family are at stake, maybe even the future of all mankind rests in his hands! But it’s okay, because apart from an unsuspected twist where his partner tragically dies, the main character makes it out alive and gets to his daughter’s graduation.

In life, similar to in the movies, sometimes it feels like we are hit by a freight train that does not stop; carriage after carriage barrel into you bringing more bad news. Wouldn’t it be nice if every other carriage was good news instead? 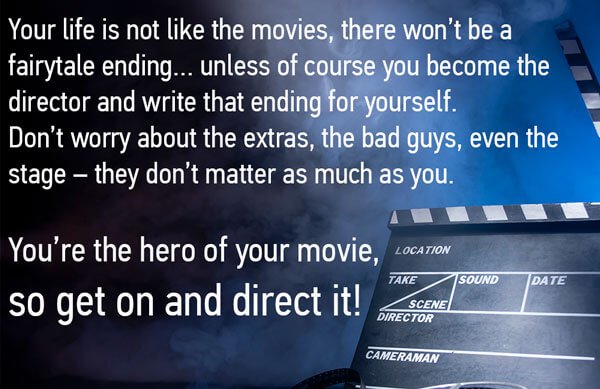 Hey, you’re losing your house, but don’t worry – here comes a pay rise! Don’t worry about your cancer, because we just found the cure.  Your partner cheated and left you and your kids behind, but here’s your knight in shining armour.

If life was like that, during the bad times we could just lay back put our feet up and wait for the good times to roll in.  They say bad things happen in threes, so maybe it’s every third carriage that brings the good news?

Who are we kidding? Bad things happen, and unlike the movies you don’t have to be on the railway track for the freight train to hit.  In truth, the bad news does not stop. If you’re losing your house the chances are you cannot sleep with worry, so your health and your job suffers.  If you become ill it has a knock-on effect too.  It feels like there is no end to this freight train.  It scooped you up and took you along for the ride, and there’s no chance of it stopping to let you off gently.

At some point you have to get off the train, because waiting for it to gently pull into a station and give you the red carpet treatment is pointless; it’s not going to happen.

It takes strength, courage and immense bravery to jump from the train but these are the things that continuous bad news takes away from you.  Eventually you feel broken, numb, like a complete failure – and you feel like you don’t deserve what’s happening at all, but that you don’t deserve things to get better either. At this point you have no idea how to get back on your feet, and inspiring stories don’t help much because you don’t believe in your own strength.

You don’t need strong, wise or a plan. And neither did anyone else that turned their lives around, not at first.  They simply at some point said “that’s enough – time to get off.”

If you can drop your anger, stop blaming others and realise you cannot change what happened in the past but that you can change the outcome of your future, you remove the fuel from the train; to mix metaphors horribly, you take the wind out of its sails.

At the same time as slowing down the train, you gain that little bit of strength and confidence needed to jump off, and remove that driving force that kept you on board.

Not one of the people in the inspiring stories you read about were given that magic movie moment where everything turned around for them.  Not one.  They all made it happen themselves, and so can you.

Your life is not like the movies, there won’t be a fairytale ending… unless of course you become the director and write that ending for yourself. Don’t worry about the extras, the bad guys, even the stage – they don’t matter as much as you.  You’re the hero of your movie, so get on and direct it!

Do you want a better future? If the answer is yes, then take that step, and grow and gain everything you need along the way.

PreviousIn life we have choices
NextWhat do you see in the mirror?