Do Vets, Doctors and Plumbers overcharge?

I have a West Highland Terrier called ‘Bounty’ – he’s named after Dog the Bounty Hunter, not the chocolate bar – he is now nearly 7 years old. Approximately two years ago he developed a skin complaint, which is apparently quite common to this breed. He would scratch himself until he was red raw and bleeding. We received no end of advice from everybody, most of it very welcomed, and found out more on the internet.

After taking him to the local vet a few times, the cost was stacking up and we were getting nowhere. Bounty was then referred to a dermatologist. Yes, you read that right, you don’t just get a “plain old vet” nowadays, they have all sorts of specialists just like human doctors. 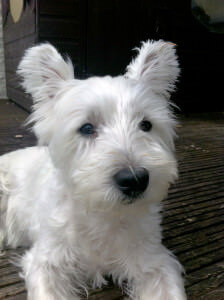 28 days of antibiotics, steroids and two baths a week later, he was better but far from perfect. We were getting to the bottom of what was wrong, but we were still left with the common reasons: stress and fleas. Most dogs are allergic to fleas, and regarding his stress I could understand that, it must be stressful to have to scratch constantly. So, we started on a rigorous routine of flea control in and it started to improve matters, but it did not solve the problem. Around 6 months ago I was recommended a low protein food, which has worked wonders. It is not cheap, but it’s worth it. Even if he has a small serving of normal food, some meat or some extra titbits, he goes downhill quickly.

Onto the reason for writing the story: I was having a chat with somebody earlier on, and I mentioned how everybody was happy. Bounty was better than he had ever been, and the vets was now richer. Their reply was: “but it was not good for your wallet.” – True!

Time and again we hear people say that vets and other similar practices rip the public off. I see it differently. It was my choice not to become a vet, and they chose to pursue that career. I am glad they did. We shouldn’t be so quick to condemn professionals for charging for their services. They were the ones that did all the work, racked up the student debts and studied for years on end, while most of us chose an easier path.

Just like something can be inexpensive but not ‘cheap’, something can carry a high cost but an even higher value. At the end of the day, the vet improved Bounty’s quality of life, and the monetary price we paid for that was worth it.